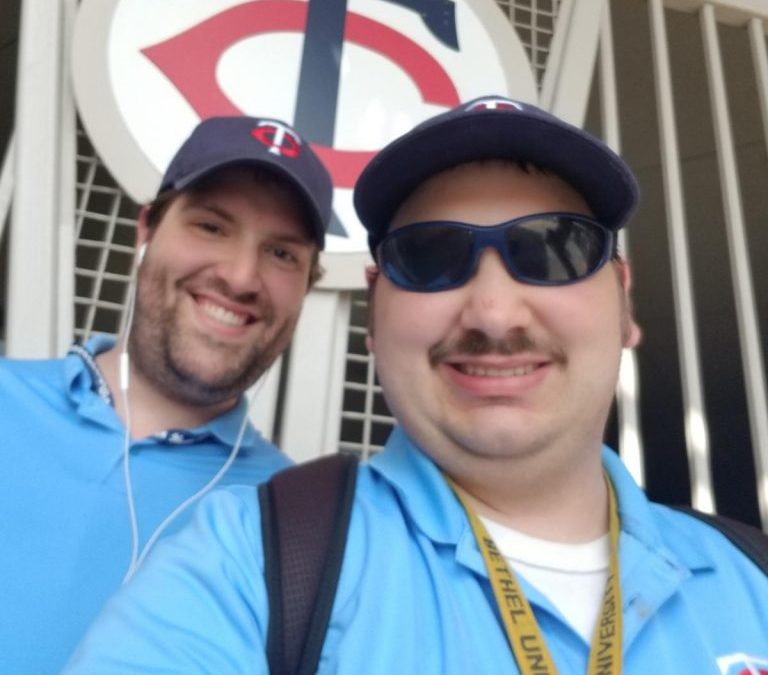 Jonathan’s smile and friendliness warms those around him. During his interview for this story, he was recognized at the Edina Jamba Juice, next door to one of his jobs, where he was greeted with enthusiasm. He typically leaves friends and acquaintances with a smile on their faces, and people remember his sharp wit.

He uses these attributes, along with a rock-steady work ethic and motivation, to stand out as a strong ambassador for the Minnesota Twins. He is also responsible with his work schedule, and his passion for the Twins has contributed to his success in increasing his tasks over time. At the gates, he scans tickets and sometimes hands out promotional items to lucky fans. Jonathan loves getting to keep some awesome promo items like his winter Twins hat or, his favorite, the magnet schedules. Outside of work, he enjoys handing out game schedules, sharing statistics and player updates, and encouraging everyone to go to games to cheer on the home team.

As Jonathan set out on the Discovery Process with Kaposia, he was most interested in working in social settings where people are having fun; where he can truly thrive. This year marks his ninth year with the Twins! Working for the them has been a confidence boost. “It’s my dream job,” he said. “I always thought I could be a part of their family. They have a good family.” He especially enjoys working with his older co-workers, many of whom are retired and have interesting stories. He has a ton of fun there and even gets to hang out with his beloved TC Bear. Jonathan shared that, just like every year he’s worked there, he couldn’t wait for the Twins’ home opener to start, which began on March 28.

Jonathan and his career consultant worked to switch from working at his second job into something to better complement his Twins job. So, during the Twins’ off-season, he increases his hours at his second gig, Chuck E. Cheese in Edina. In April, he will have been there two years! In the job search process, Jonathan did a wonderful job of connecting with not just his potential employers, but others in the spaces he met along the way. On his first visit to Chuck E. Cheese, he chatted with the staff member who was checking families in and out. After spending time with Jonathan, she ended up being a voice to the manager that he would be a great addition to the team and could help out on her maternity leave!

At Chuck E. Cheese, Jonathan dons the famous comedic mouse costume and interacts with guests. He has to be detail-oriented and multi-task when he checks families in to the facility because they all need matching stamps for safety purposes. When he’s dressed as Chuck E., Jonathan feels “really happy.” Sometimes, Jonathan sees Wild or Vikings players come in to say hello, and that makes his day. Not only does he rock at his job at the Twins, he was also named employee of the month at Chuck E. Cheese in December.

It’s clear that, wherever he goes, Jonathan leaves an impact.