May Featured Customer: Eric’s Calling with The Wolves 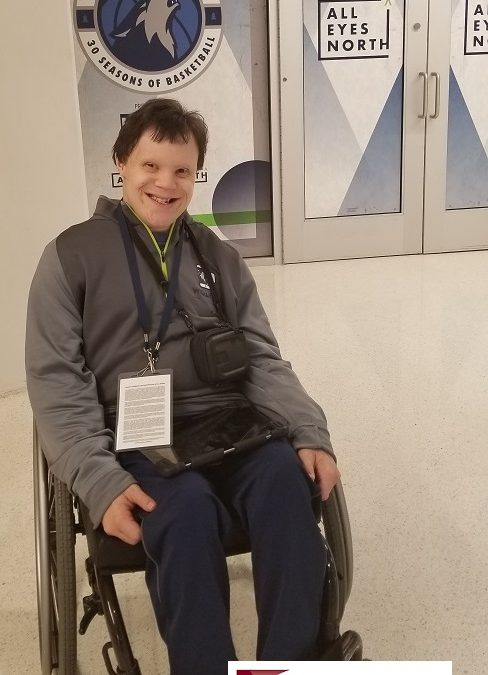 Eric Ferguson’s enthusiasm for all he does tends to spread to those in his general vicinity. Whether it’s onstage acting in community theater productions such as Grease, or And Then There Were None or working the doors of Timberwolves basketball games, it’s clear he has a noticeable effect on people.

As Eric and his Kaposia Career Consultant examined his many passions and talents during the Discovery Process, they identified his four official themes as sports, communication, helping others, and advocacy. His penchant for putting himself out there and joy of connecting with others later surfaced as a strong thread connecting the themes.

Pursing the arts led to Eric being offered a job at Orchestra Hall. However, the long commute combined with nights and weekend shifts convinced Eric to continue his search. He wasn’t interested in acting as a main source of income either, because it would mean a lot of his time would be spent continually scoping out individual gigs.

Then, a connection from Kaposia enabled Eric to get in touch with the fan experience team at the Timberwolves to set up an informational interview. Although the commute was similar to the Orchestra gig, Eric was drawn to working with the Timberwolves after the first meeting. The arts were more about being the actor but, with sports, it was more about being a fan and bringing others’ spirits up in that way. For Eric, it’s an ideal situation since he can transition to help out with the Lynx in the Timberwolves’ off-season. What’s more, he gets a couple months off a year to continue his hobby of stage acting, and he is currently staying busy taking an acting class at Normandale Community College.

At the Target Center, Eric greets fans when they come in. He guides them to the proper place to get checked in. He is at the accessible gate, which ensures fans that might be overlooked because they’re using the elevator get checked in right away. He’s also right by the courtside entrance, where he gets to see famous people (He even met Jimmy Butler before he got traded!). During the game, Eric enhances the fan experience by showing them how to download and use the app to pay for concessions and see live game updates as they wait. He gets pumped up along with the cheerleaders and Action Pack, joining in on the excitement.

In the third quarter, Eric goes up to the press box and watches the game while eating lunch, brought to him by supportive coworkers. Then, at the end of the game, he feels what fans are feeling. The atmosphere after a Timberwolves game is either of excitement or discouragement depending on the outcome, and the way Eric says goodnight to fans really draws out responses from them. He says, “We’ll get ‘em next time!,” if they lost or, if they win, “Go Wolves! Have a great night!” He raises their spirits through his own positive attitude. He goes beyond just doing his job and his excited, caring energy makes fans come back. As Eric says, “It’s a little far from my house, but the fans are worth it.”