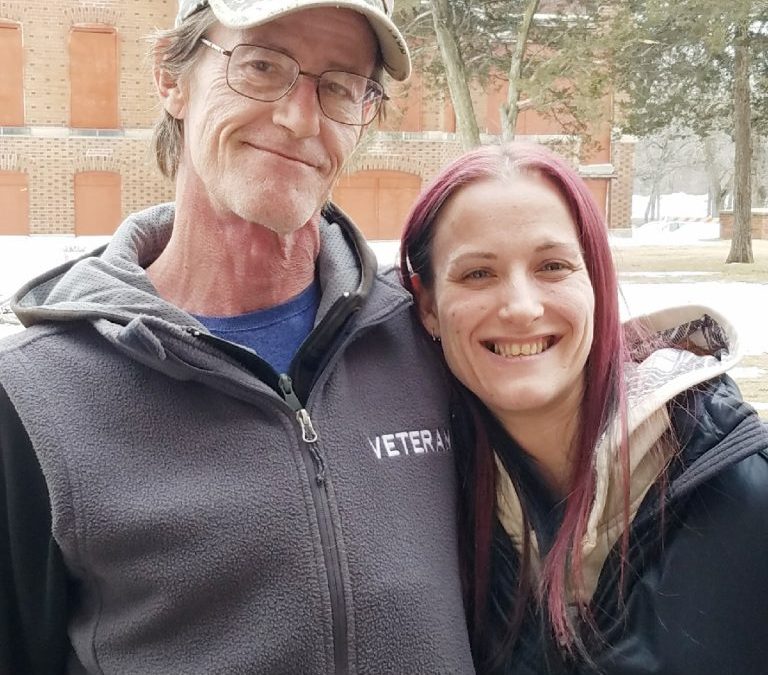 Every day, an estimated 22 veterans die of suicide. Many resources and supports have been put in place to reduce this number to zero. Although the state reports that homelessness among veterans has been significantly reduced, not reported are veterans who stay with friends, live in their vehicles, or live in more remote areas. Mental health challenges, homelessness, physical health problems caused by conditions and circumstances of serving in the military, isolation, lack of services available to veterans, and the lack of quality medical services available to veterans leaves many of them alone, suffering, and secluded from many community inclusion opportunities.

Statistics often neglect to tell the stories of honorable men such as Ted. Ted served in the U.S. Navy from 1975-1979. The ships he served on took him to all parts of the world, serving through the end of the Vietnam War and the tumultuous times that followed.

In 2017, Ted was technically not counted as homeless because he had friends that invited him to sleep on their couches. Ted literally was homeless, unemployed, and financially broke. He was physically suffering from constant pain. He daily suffered from the haunting darkness that he experienced as a result of PTSD, depression, anxiety, sleeplessness, and a lack of selfcare. One evening as he settled into his friend’s couch,
a news story introduced the Eagle’s Healing Nest, a place where veterans are invited to make their home. The Nest provides a home, support from other veterans, support from military family members, the community, and other agencies that reach out to provide veterans with not only a home, but a place where they can heal from the many challenges they face.

Ted moved to the Nest in Anoka in December of 2017. His initial experience was challenging, lonely, and hopeless. He found it nearly impossible to connect to others. He had been estranged from his family. Although he had a roof over his head, he couldn’t see a positive path ahead. His days were filled with gloom and despair.

The Kaposia International WRAP Center of Excellence, in partnership with the Eagle’s Healing Nest, has been providing Wellness Recovery Action Plan (WRAP®) seminars, WRAP weekly support meetings (WRAP PALS—People advocating, listening and support one another), peer support, and strong coffee for the veterans at the Nest for three years. In March, Kaposia provided WRAP and Discovery™ at Anoka. Ted decided to give WRAP a try. Ted said he felt reluctant, negative, and initially not willing to engage in the wellness connections and sharing of experiences.

On day one of the three-day training, the “darkness” was so close that he decided going on was not an option. The burden of it all had become unbearable. The dialogue that took place throughout day one of WRAP, the support of his peers, the home that was his place for healing… it all intervened. Ted reached out to his fellow veterans and came to day two of the WRAP training with a new sense of hope, support, and light.

Ted said that the empathy of his fellow veterans rekindled his will to live. “Being here with my family of veterans and at my new home has given me the time, space, and security to understand my problems.” WRAP + Discovery gave Ted an opportunity to develop and live his strength-based, person-centered WRAP and look at possibly being gainfully employed as a result of using the many strategies gained from the Discovery training and the peer support he received.

Ted embraced healing, taking responsibility to access many additional resources at the Nest and the Minneapolis VA. He reconnected with his children and grandchildren for the first time in a long time and enjoys spending weekends with them.