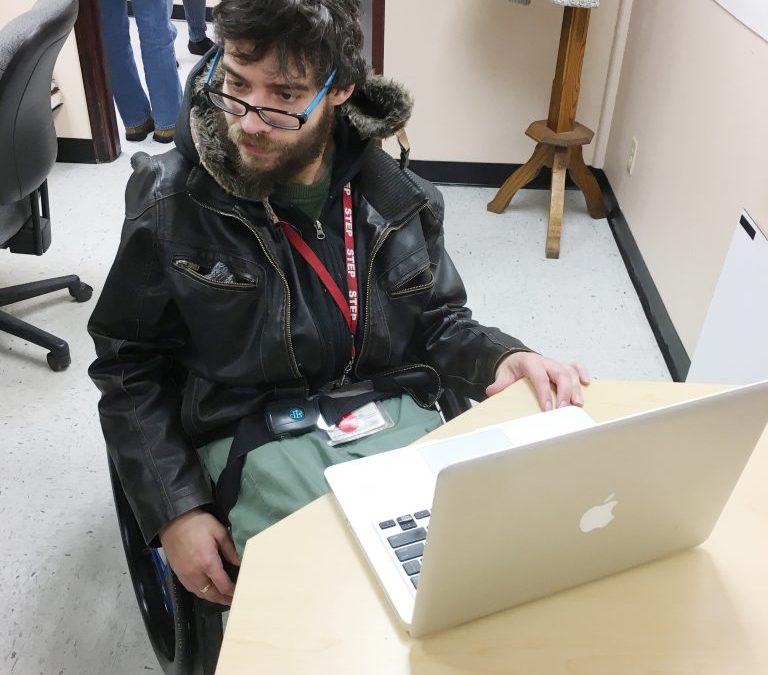 by Carol Rydell and Gwyn Armour

Orion has many talents and interests. The Discovery Process provided a broad look at the unique skills Orion has that could be an asset to an employer.

Early in the Discovery Process, Orion’s love of different cultures and languages became readily apparent as themes in his job search. Although Orion hasn’t traveled outside of the United States, his bedroom contains keepsakes from different corners of the world—all gifts from his family’s travels. He creates online stories rich with detail, indicating a good grasp of complex language skills. His wheelchair displays a variety of political causes supported by Orion and his extended family. Most impressive, however, is Orion’s ability to learn languages quickly and with amazing accuracy. Though he finished studying Spanish in high school, his Spanish speaking abilities tested at a translator’s level. He became fluent in German by participating in the Concordia language villages. The more exposure he has to a new language, the more his abilities grow. He has skills in 5 languages, and even with one hour of practice with a Kaposia employee, he picked up some basic Somali. His repertoire keeps growing.

Orion is also interested in people. He goes beyond superficial questions, trying to learn more about people and what is most important to them. Personal relationships quickly became another theme. His third theme captured his incredible memory and how he uses it to retain detailed information about his world.

Despite his many skills, Orion had never had a job until now.

Orion works at the Latino Economic Development Center (LEDC), whose mission is to enable Latinos to secure economic and financial opportunities to create a better future for their families and communities. Orion is very much a part of that mission. He sends out email and text blasts about jobs and classes to the Latino community connected to LEDC.

Orion has had a number of information interviews at places that could have used his skills, but LEDC was the place that saw his potential, not his disability. Orion loves the days he goes to work. He has the opportunity to use his intellect and language skills. He has made friends at work and can feed his passion for social justice. For Orion, the job is “awesome.” He is an asset to the Latino Economic Development Center and very much a part of a small office devoted to making the world a better place for people who have limited opportunities to the simple necessities that a home and job provide. LEDC has its niche in the community, and so does Orion.