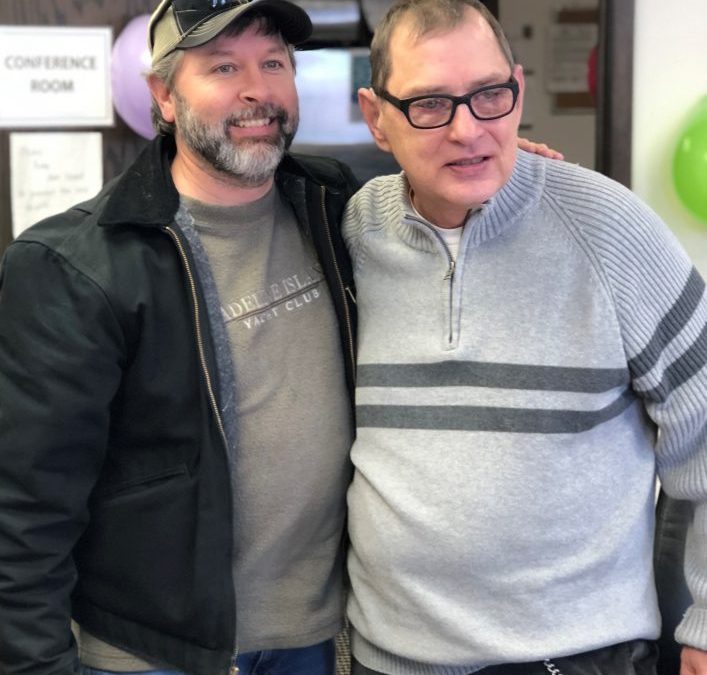 Steve’s first day on the job at North Star Ice was May 19, 1987 as a Production Assistant. When he first started, the transition was rough, but the environment was perfect for him. Steve was transitioning from a very stressful time in the state institution. Through his relationship with his sister, (who was unaware that she had a brother until then), he was able to move into a group home and work in the community with support from Kaposia. The harsh effects of the state hospital faded, and Steve was forever changed from someone who was aggressive and isolated to a cherished member of what is now Arctic Glacier Ice. Steve was transformed by having a chance to succeed in the face of what seemed like insurmountable odds.

Given the nickname of “Big Cat” by manager Bob Nikolai (because of his “cat-like moves”), Steve had a great relationship with his co-workers at Arctic Glacier and became especially close with managers Bob and Chris “Cooker” Cook. He had daily contact with them, and Cooker kept Steve on track and busy when production was slow. Steve steadily mastered new responsibilities until he was running the ice bag wrapping machine and helping with maintenance duties during the slow times. Steve’s work at the company not only changed his life, but also his co-workers. Through Steve’s example, others have seen the power of having your own job, and their perspectives of employment have been altered.

Arctic Glacier was Steve’s home away from home. They held a 25-year anniversary celebration for Steve and co-worker Glen a few years back. They got leather jackets and a special plaque from the Mayor.

And now, 31 years after he began at Arctic Glacier, it is time to celebrate all of Steve’s years of hard work. His last day was December 13th, 2018, and the company hosted his retirement party the following day. It is a new chapter of life for Steve, and he now enjoys spending his days being active with Kaposia’s Retirement program in the Roseville Community Group. He calls coming to his retirement program his “fun days.” He makes a point to sign and say, “Thank you,” to staff after each activity or event and often gives staff a fist bump to show his appreciation. His favorite outings with the group have been boat fishing, volunteering at Feed My Starving Children, going out for lunch, and helping out the kids at Prince of Peace church.

Steve is a totally different and happier man compared to who he was 31 years ago. Before he connected with Kaposia, he was headed back to the state hospital, and the workforce would have missed an exceptional employee. Thanks to persistently challenging himself and building meaningful relationships in the community, he is living his best life, and deservedly so.