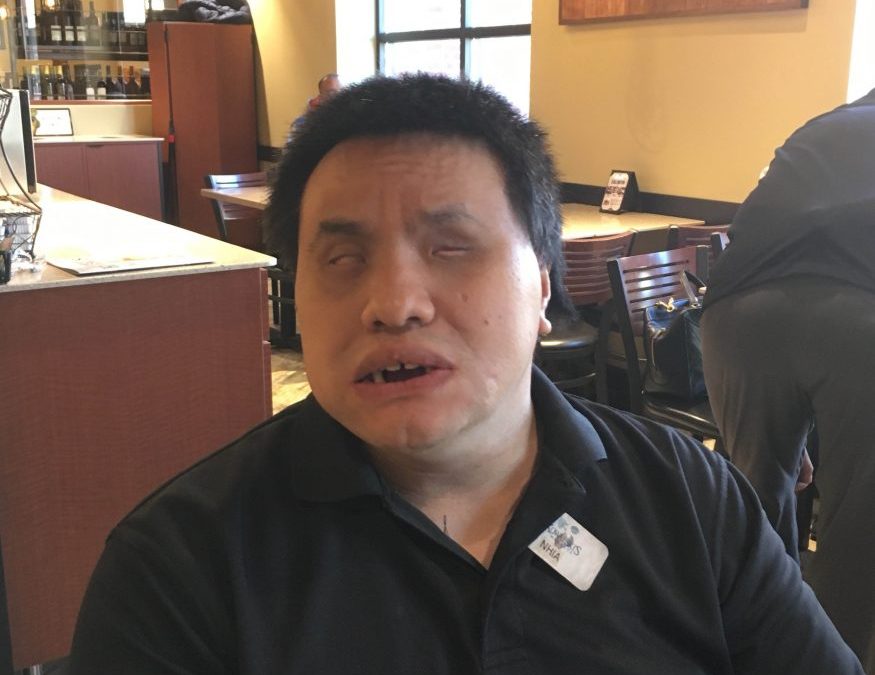 Kaposia and our supporters understand the importance of everyone being able to embrace their own personal genius with employment that means something to them.

One of our customers who put his genius to work is Nhia. A Trekkie and Star Wars fan with plenty of wit and personality, Nhia spends his free time volunteering at Second Harvest Heartland and loves attending movies and museums. He considers his blindness to be an inconvenience, a hindrance that can’t stop him from remaining active and bringing his exuberance wherever he goes. After Kaposia partnered with him to find the best fitting job, Nhia started out working at Which Wich Sandwich shop for a year stamping labels on sandwich bags until management decided to have the bags printed.

The determined Nhia did not mull over disappointment. Nhia eagerly dove into the Discovery Process once more in hopes of finding an even better job. With his themes of hands-on tasks and interest in providing a service for others in mind, Nhia met with Jamie, assistant manager at Kowalski’s Market in Uptown.

Nhia and Jamie instantly bonded over the discovery that both were avid “Trekkies,” and the first part of their informational interview was spent recounting favorite Star Trek episodes. When Jamie asked Nhia whether he could bag groceries, Nhia told him he’s done it whenever he’s shopped. Jamie and the director of HR were very impressed with Nhia’s positivity and strong motivation to work. When they offered him a bagger position, Nhia excitedly accepted.

Every day at work, it’s clear that Nhia enjoys being a contributing member of the workforce again and is developing meaningful relationships at work. He has a coworker, Kate, who has become very close with Nhia and has taken it upon herself to ensure that he knows his way around the store—she also makes sure they have time to eat lunch together.

Jamie approached Kaposia multiple times to let us know the noticeable impact Nhia’s attitude and work ethic has made at Kowalski’s. Nhia is friendly to anyone who comes to his aisle, and customers are beginning to call him by name. His co-workers’ perception of what a “disability” is has shifted dramatically, and they realize that everyone has some sort of “disability. It is clear from Nhia’s example that, yes, everyone does in fact have something to bring to the table and contribute to others!

So not only do our customers like Nhia benefit when they are able to share their talents and personality with others in the community, we also see time and again that our customers significantly improve their employment environments.