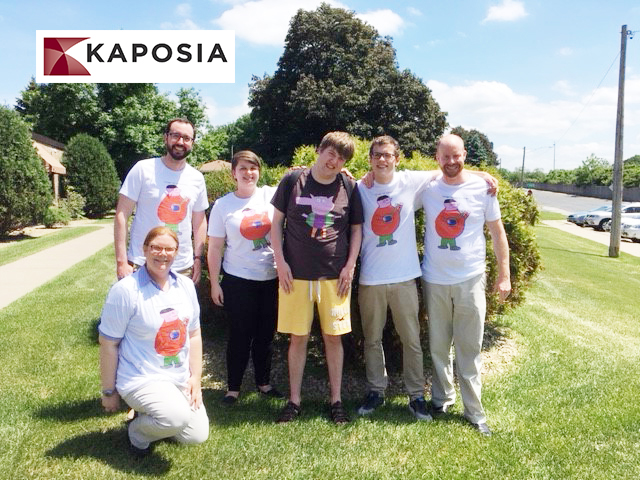 by Callie Sleper and Gwyn Armour

The names of Gabe’s pieces of art speak for themselves. Gabe has been combining his sense of humor with a passion for drawing since he was five years old. His imagination is filled with a vibrant, colorful cast of characters that continue to fill so many pages, mostly using computer program Deluxe Paint. Gabe’s talent and unique interest in art came out in his Discovery™ process, and through his previous hobby/job of designing note cards for family and friends. While touring art museums, Gabe displayed a clear interest in cartoon art and realism pieces, even going so far as to classify his own artwork as surrealistic. After observing the quality and intricacy of his previous work, it was clear that Gabe’s art should be further explored as a business opportunity and an outlet for his own creativity and personal growth.

Everyone who visits Gabe’s Facebook page, “Gabe Draws Stuff,” seems to have a favorite piece. There is Slim Pig, the ironically-named swine who sometimes meets up with buddy, Bair Bear. There’s The Yak Who Has Eight Tentacles; Fat Singer Joe Playing His Banjo, who is based partly on Gabe’s appreciation of “Sesame Street” musician Joe Raposo and Kaposia Employment/Community Specialist, Joe Sullivan. There are plenty to choose from, and everyone seems to have an opinion on the matter.

With the help of Kaposia, Gabe and his family just launched an online artists’ shop on Redbubble where you can get your hands on basically anything you can think of from an Aardvark and Goldfish duvet cover to Slim Pig T-shirts, greeting cards and stationary, dresses and scarves, mugs and canvas prints, to a Gator in a Hat phone case, which Gabe himself sports. Gabe cherishes the ability to buy DVDs and cartoons for himself, and they motivate him to further hone his style.

Requests fly in from fans on Gabe’s Facebook page for him to add another piece of merch to his online shop with their favorite drawing.Staff at Kaposia also requested T-shirts emblazoned with Fat Joe and his banjo so they could rock them around the office, and fans are encouraging Gabe to display his art at a local gallery. You could say that Gabe has something amounting to a cult following. He has already sold over 30 items; far more than Van Gogh sold in his lifetime. Inspiration for his work—aside from Gabe’s love of alliteration, puns, and irony—comes from a lifelong love of his favorite shows, “Sesame Street” and, of course, “The Muppets.” Gabe’s admiration for New York street artist, Keith Haring; Jazz artist and “Sesame Street” contributor, Cliff Roberts; as well as for “Sesame Street” and “Muppets” artists Fred Calvert and Ken Snyder add to his craft. He takes inspiration from local art museums such as the Walker Art Center, and you can view Gabe’s drawings of some sculptures from the Minneapolis Sculpture Garden on his Facebook page.

There is a restorative quality of Gabe’s art which also drives him to create. Gabe creates his best work when he is not feeling “tired” and “garbage,” and it making art oftentimes keeps him from feeling that way. Many of the characters he draws have back stories, and oftentimes they interact with each other through conversation or doing something together. Gabe feels less isolated in his own life when his characters are busy relating to each other.

Gabe’s character, Anthony the Ant, is modelled after himself. Anthony started with only a couple of legs, but every subsequent ant has featured six or more legs, and each of his legs matches with something he does. One drawing of Anthony showed him slamming a door, biting himself, hitting his head, stomping his foot, and kicking the wall. By drawing Anthony doing many of the things Gabe himself wishes he didn’t have to do, Gabe expresses himself, and it helps to take those thoughts out of his head.

Gabe hopes that, by spreading his art around to places even as far away as “Africa, Asia, China, and Israel,” he can make others happy. He suggests that any would-be fan of his check out his “Gabe Draws Stuff” Facebook page and Redbubble site at https://www.redbubble.com/people/Gabe-Draws/portfolio (link also included on his Facebook page), and stop what you’re doing to go watch “Sesame Street” and “The Muppets.”